In order to see any photo full size – just remember to simply click on the photo.

All news releases and other media stories about the Foundation since the beginning of the Foundation in 2007 are being meticulously organized and archived for eventual display in the FASF Museum and for use in various FASF promotional literature during the interim. 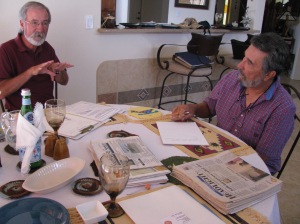 Roy and Richard are both U.S. Navy veterans, having served on active duty during the Vietnam era. Roy’s specialty was linguistics (Chinese) and Intelligence while Richard was a Crew Captain for heavy jet fighters on various Aircraft Carriers, including the USS Enterprise and USS Independence. 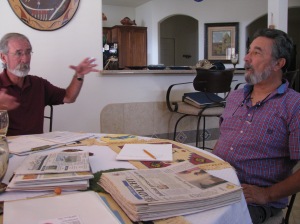 Roy said that the influx of new talented local members like Richard has been a blessing, since there is a great deal of detail work, such they are seen doing above and at the right, that needs to be done before the year’s end.

Roy reports that the new growth in our membership has been a great boost. He said he is still looking for more volunteers to help staff the upcoming NM State Fair FASF Booth. Several days are already fully staffed, but both Saturday and Sunday, the 10th and 11th of October, still have openings, so please contact Roy if you’d like to help at the Booth. You can reach Roy by calling the FASF local telephone: (575) 519-1100 Please give him a call if you can possibly help staff our Fair Booth.