Thanks to FASF Member Virg Hemphill, Aerodrome Aviation Scout, for this story from SAFB.

Dorian Walker, Chairman of Friends of Jenny, flies the JN-4 Jenny, at Bowling Green, Ky. The Curtiss JN-4 along with Scott Air Force Base are celebrating a century of service. The Jenny is scheduled to perform at the Scott AFB Centennial Air Show and will also be on display for spectators to view the aircraft. Photo by Senior Airman Tristin English

One of the highlights for Scott’s Centennial Airshow and Open House on June 10 and 11 will be a flyby and display of an historical aircraft that has rich ties this region as well as the beginnings of flight.

The Curtiss JN-4D Jenny is possibly North America’s most famous World War I aircraft. It was a twin-seat, “student-in-front-of-instructor,” dual-control biplane. Its tractor propeller and maneuverability made it ideal for initial pilot training, and was widely used during World War I to train beginning pilots, with an estimated 95 percent of all trainees having flown a JN-4.

In 1917, Congress allocated $640 million to build more of these trainers because at that point there were only 32 airplanes in the Army in which only 10 or 12 were serviceable.

“Flying a 100-year-old aircraft is not like flying anything that’s in the air today; there’s no dynamic stability,” said Dorian Walker, Chairman of Friends of Jenny, a group that is dedicated to building and flying these aircraft. “It has big wings, which is good if you lift, but it’s got a lot of drag. So you’ve got two things that are normally associated with flying that are working against each other. Drag and lift. So you’re kind of battling those elements.”

Three members of the Friends of Jenny group built the aircraft that will fly at the airshow—a remarkable task since it had to be built from scratch and by matching up designs that would work safely for today’s aviation environment.

“To build one of these airplanes is amazing on so many levels,” said Dorian. “It’s amazingly frustrating because there’s no list of, ‘well this is what you do next.’ It starts with a process. The process is research … and trying to understand what went into making it—and then once you’ve done that you say, well, what about plans? Are there any plans?”

Retired Lt. Col. Gary Wickliff, Treasurer & Board of Directors for Friends of Jenny explained how they acquired the plans from the Smithsonian, but even that was tricky.

“Like with any plans, they’ll change a number somewhere so if you don’t catch it you’ll be trying to find a number that doesn’t exist anymore. You may have the new number or the old number and you just have to know where to supersede it,” he said.

Ultimately, the Jenny was built in three different phases. The main project was started in Kentucky, the wings were built in Lebanon, Tenn., and the plane was put together and painted in Tompkinsville, Ky., and flown there for its initial flight.

They kept the original wood air frame, but built a contemporary engine to the original specs and acquired some updated aviation technology. However, like the original, there are no brakes and no tail wheel—just the tail skid which was used as a brake. The air frame is exactly what people would’ve seen 100 years ago.

For the test flight, the Jenny was brought into a 1,200 foot grass median between a runway and a taxiway. At the end of the median, on the other side of the runway, was a pond of water and on the reverse side was a wooded hill. 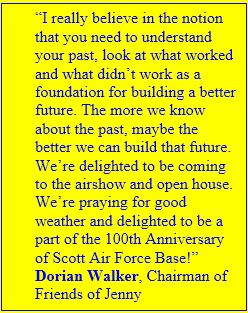 “You think about flying this for the first time, and the courage it takes. You can’t go out and get lessons on how to fly this, so when you strap yourself in the first time you don’t know exactly what to expect. It takes a lot of courage and good aviation skills that have to be brought to bear,” said Wickliff.

Myron Callaham, Board of Directors with Friends of Jenny, said “It gives you a great respect for the early aviators because everything they did was for the first time, and many times didn’t know what to expect, so it took a lot of courage to push the envelope.”

Dorian added, “This is the 21st Century, so you don’t fly planes without brakes and you certainly don’t take off on that short of a field with a conventional type airplane. I sat in there and got the crank up and listened to the engine. I had a lot of questions about what was about to happen, but the one thing that calmed my nerves and boosted my courage was the relentless number of hours, time and commitment of all those who had come to bring this icon of aviation to this particular moment. And, guess what? It flew!”

A lot goes into planning a trip in the Jenny. They choose a route that has runways that are close to the prevailing wind at the time that they’re flying. The wind and the weather can change in any moment and they have to be ready to adjust their travel plans.

And, since the Jenny was built as a trainer, it only has a 24 gallon fuel tank and it burns about 11 gallons an hour, maybe more depending on the wind, so it will take about half a day with two refuel stops before arriving at Scott Air Force Base.

Dorian said, “I really believe in the notion that you need to understand your past, look at what worked and what didn’t work as a foundation for building a better future. The more we know about the past, maybe the better we can build that future. We’re delighted to be coming to the airshow and open house. We’re praying for good weather and delighted to be a part of the 100th Anniversary of Scott Air Force Base!” 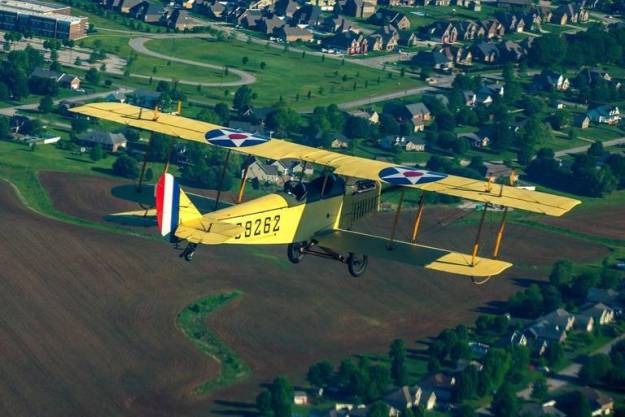 Dorian Walker, Chairman of Friends of Jenny, flies the JN-4 Jenny, at Bowling Green, Ky. The Curtiss JN-4 is possibly North America’s most famous World War I aircraft. It was a twin-seat, student in front of instructor, dual-control biplane. Photo by Senior Airman Tristin English

Watch this restored 1917 Jenny as it is hand-cranked and takes to the air at the Owls Head Transportation Museum, in Owls Head, Maine. This original Jenny is part of the outstanding collection of pioneer era air and ground vehicles in the collection of the Owls Head Transportation Museum. As with most of this collection, the Jenny can be seen flying on this video, or in person at one of the ten special events that take place each year at the museum, in Owls Head Maine.