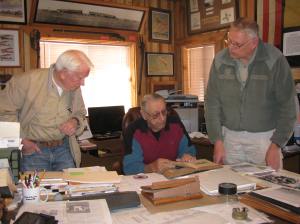 Bill Madden (left) and Fritz Wagoner (right), both of Las Cruces, NM, members of the First Aero Squadron (FASF), meet with President of the Columbus Historical Society and local historian, Richard Dean (center), to discuss and analyze historical information and data concerning the 1916 attack by Mexican General Francisco “Pancho” Villa on Columbus and the town’s Army garrison some 98 years ago.  Dean’s great-grandfather, a local store owner, was among the ten innocent civilians killed by the Villistas during the sneak attack.  Madden and Wagoner are also members of the Experimental Aircraft Association (EAA) chapter in Las Cruces.  Not pictured is FASF Site Planning Coordinator, Anthropologist and FASF Trustee, Kathleen Martín, PhD, of Deming, NM.

Madden and Wagoner have been surveying the FASF airfield land in order to more accurately determine the precise locations of the Army aviation facilities as they were erected and employed immediately following the attack on Columbus.

Mr. Dean’s intimate knowledge of the site and what transpired on it, along with his unique store of early Army aviation relics and other artifacts at his Columbus Historical Society Depot Museum have proven indispensable to the successful achievement of the Survey Team’s goals.

The Foundation plans to rebuild the old Army Squadron’s hangars and other support buildings to as closely as possible replicate their appearance almost a century ago, when America first deployed airplanes in a sustained combat operation in pursuit of Villa.  The FASF is working to get this “Flight Line” of airplane storage and maintenance facilities completed in time for the Birth of American Air Power Centennial Celebration in 2016.

The Foundation envisions the Centennial will be a major national event for tiny Columbus, one at which many thousands of visitors, civilian, veterans, and active military personnel, as well as many visitors from Mexico, will attend,  bringing a surge in business to the Deming and Columbus area’s hospitality sector.  Visitors will witness and participate in an exciting air show and ceremonies commemorating the historic event’s 100th anniversary.

Since so few accurate maps and relevant photos exist of the airfield and its facilities back at the time of the initial combat operation, it presents a significant challenge to accurately and meaningfully restore the site to its condition and appearance as the “Birthplace of American Air Power“.  The FASF Survey Team is using modern archaeological techniques and equipment to help it successfully meet its mapping and planning aims.  Also planned for the airfield site will be a large (125,000 square foot display area) Museum, in which it is intended to house numerous flyable vintage pre and post World War I aircraft.  When the FASF’s plans are realized, the FAS Airfield should become a major tourist attraction in SW New Mexico.