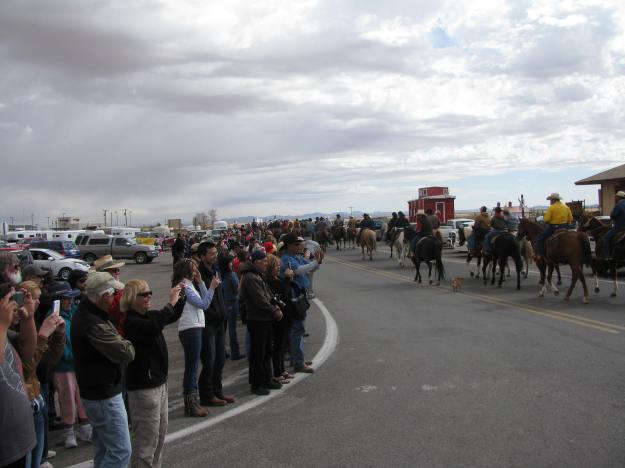 Above is part of the crowd enjoying the horsemen and women from Mexico and the U. S. taking part in the annual Cabalgata event.  These riders are heading East along the El Paso border Highway, just in front of the Depot Museum, after turning off the Columbus Road from Palomas, Mexico.  The original event  was intended to memorialize those who died during the infamous surprise raid on March 9, 1916.  Today, however, as evidenced by the colorfully costumed entertainers energetically acting out Mexican Folkorico dances in the village plaza, the Cabalgata is also now a joint endeavor by the riders from Mexico and from the U.S., all riding together in a display of a reenergized level of friendship and cooperation besteen the two nations.

From Las Cruces, FASF Airfield Survey Crew Team members Bill Madden and Fritz Wagoner arrived in time to meet with one of the afternoon’s official Presenters, John Deuble, historian and Author (and member of the FASF) from Albuquerque, NM, who spoke at the PVSP Recreation Hall about the First Aero Squadron’s unique experiences during their pioneering deployment of early Army Aircraft, which were engaged in the famed “Punitive Expedition” into Mexico under command of Captain Benny Foulois.  Below is Mr. Deuble nearing the end of his lecture.  He is being assisted by John Read, to his left, Managing Park Ranger and active FASF member.

After the day’s events ended, some of the participants gathered for a group photo: 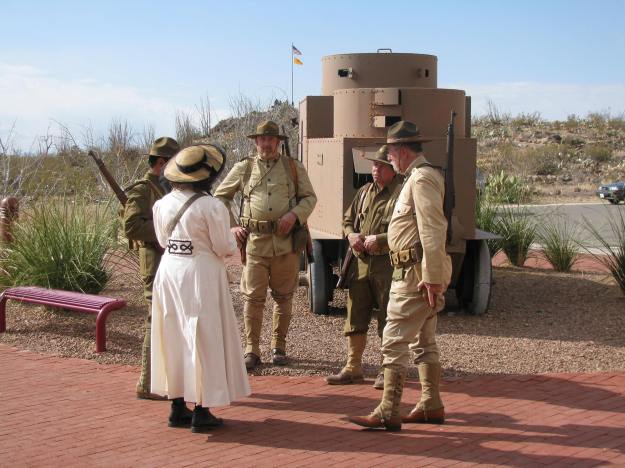 Seen above at the Raid Day event are part of a group of reenactors from Las Cruces, NM.  Left to right, above, are: Alice Pinkston, Luis Gonzales, Wade Pinkston, Russell Schneider, and Ira Pinkston.  They were decked out in full 1916 13th Cavalry regalia and will be working with the FASF to help reenact the actual raid event during coming memorial celebrations.  The group is under the leadership of Russel Schneider and is planning much larger, far more active and complex future involvements with the FASF.  Their future engagements with First Aero would include simulations of the actual raid gun battles, much as is done by the reenactors at the famous annual Civil War Gettysburg celebration in Pennsylvania.