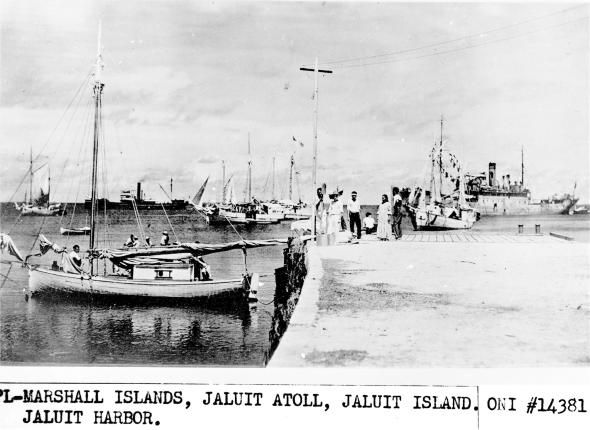 In an undated handout photo from the National Archives, people stand on a dock at Jaluit Atoll in the Marshall Islands. A recent History Channel documentary claimed that the photo contains Amelia Earhart and her navigator Fred Noonan and was taken after the pair disappeared on July 2, 1937. However, new evidence shows that the photograph was published in late 1935.
Photograph by U.S. National Archives, The New York Times,

Thanks to the alert eyes of Bob Avery, of Toledo, Ohio, it was brought to your editor’s attention that the story we published on July 6th of last week, one hinged almost completely on a photo allegedly showing both Amelia Earhart and her navigator, Fred Noonan, on a dock in the Marshall Islands (Jaluit Island) AFTER their disappearance, may have been a major boo-boo on our part.  Somewhat shamefully, but in our weak defense, the story did NOT say the picture was dated – – – simply that it was apparently taken after the aviators were declared lost.  We were wrong.

And, just got another heads up alert from long time FASF member, Heidi Syslo, of Santa Clarita, CA, daughter of acclaimed aviatrix and journalist, Trixie Ann Schubert, that the now much seen “lost secret” photo is not what it was touted to be.  Thank your Heidi!

According to a History Channel‘s competitor, the National Geographic Channel, that same picture was actually published several years BEFORE the famous aviatrix and Mr. Noonan dropped out of view. So, with red face and most embarrassed, we humbly apologize for automatically believing the prestigious History Channel would not err, that they would carefully vet all of their key information.  The error in the photograph’s timeline was brought to the attention of all concerned by a Japanese Blogger, Kota Yamano, who quickly, as soon as he saw the big news story about the disappearance mystery finally being solved, let it be known that the picture was actually printed in a Japanese travel book two years BEFORE the flyers’ disappearance in 1937.

Furthermore, we have to now give a hearty congratulations to one of our site followers, Mr. Mike Davis, who, if you read the Amelia story’s commentaries, claimed the History Channel story was bogus and, in his words, “Fake News!” Well, Mr. Davis, it seems you have the National Geographic Society completely behind your assertion.

Hopefully, somewhere down the road, the truth to this mystery might manage to surface, and we certainly hope it does.  We would like to point out that, even though the allegedly “new” post 1937 photo appears to have been “pre” 1937, the thesis that the lost fliers may have been captured and executed by the Japanese is not necessarily nullified by the photo’s new date revelation, it just means that the photo cannot be used to place Earhart and Noonan in that particular photograph.

But, regardless, and without further ado, here’s the complete refutal story from the National Geographic itself:  (Shall we believe that they are more accurate than the History Channel was not? )

A photograph that a recent History Channel documentary proclaimed as lost evidence that could solve the mystery of Amelia Earhart’s disappearance appears to have been published nearly two years before the aviator vanished in July 1937.

The pre-WWII photograph features a throng of people on a dock in Jaluit Atoll, one of the Marshall Islands. In the documentary Amelia Earhart: The Lost Evidence, filmmakers claim that two Caucasian people in the photograph—a man standing next to a post, and a person of indeterminate sex squatting on the dock’s edge—are Earhart’s navigator Fred Noonan and Earhart herself, in the custody of the Japanese military in 1937.

However, new evidence indicates that the photograph was published in a 1935 Japanese-language travelogue about the islands of the South Pacific. As Japanese military history blogger Kota Yamano noted in a July 9 post, he found the book after searching the National Diet Library, Japan’s national library, using the term “Jaluit Atoll,” the location featured in the photograph.

“The photo was the 10th item that came up,” he said in an interview with The Guardian. “I was really happy when I saw it. I find it strange that the documentary makers didn’t confirm the date of the photograph or the publication in which it originally appeared. That’s the first thing they should have done.”

His search query turned up the travelogue, The Ocean’s “Lifeline”: The Condition of Our South Seas, which features the “Earhart” photograph on page 44. One translation of the caption describes a lively port that regularly hosted schooner races—with no mention of Earhart or Noonan to be found. Page 113 of the book indicates that the travelogue was published in October 1935.

Yamano’s evidence, which he says he obtained in 30 minutes, undercuts the History Channel’s claim that the famed aviator crash-landed in the Marshall Islands and became a prisoner of the Japanese military. Residents of the Marshall Islands and some Earhart enthusiasts have long touted this scenario, but many Earhart enthusiasts consider it outlandish. (Learn more about the competing theories for Earhart’s disappearance.) 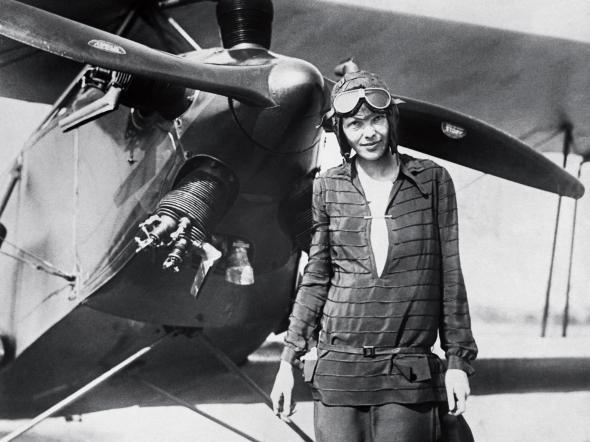 The official U.S. position is that Earhart and Noonan ran out of fuel and were lost at sea on their way to Howland Island, a tiny island in the central Pacific just north of the Equator. The island was the pair’s planned pit stop between Papua New Guinea and Hawaii.

One alternate hypothesis proposes that the pair crash-landed on Nikumaroro Island, a small island 350 nautical miles away from Howland, where 1930s-era artifacts have been found. (An ongoing expedition sponsored by the National Geographic Society recently sent forensic dogs, trained to sniff out human remains, to Nikumaroro. They may have found Amelia Earhart’s final resting place.)

In the lead up to the documentary’s July 9 premiere, the History Channel touted the photograph, which it obtained from the U.S. National Archives, as potentially transformative evidence dating to before World War II, possibly to 1937. But ever since news of the documentary broke last week, outside experts have expressed various levels of skepticism, which has only intensified in the last 24 hours.

For its part, the U.S. National Archives notes that the photograph used by the filmmakers is not marked with a date. “The materials gathered in the report support a geographical-type study or survey of the Pacific Islands,” National Archives Director of Public and Media Communications James Pratchett said in a statement emailed to National Geographic.

Tom King, the chief archaeologist for TIGHAR, the chief group investigating the possibility of Earhart crash-landing on Nikumaroro, says that he has known of the photograph for years and never took it seriously as evidence.

“We looked at it and said, ‘Well, it’s a man and a woman on a dock looking out in the other direction—it’s basically a meaningless piece of information,'” he says in a phone interview from an ongoing TIGHAR expedition in Fiji. “You can read things into it like you can read faces on the moon.” (King’s current expedition was co-sponsored by the National Geographic Society.)

And in the wake of Yamano’s evidence, the History Channel and the documentary’s on-screen personalities have expressed various forms of concern and disbelief.

“I don’t know what to say,” says Kent Gibson, the facial-recognition expert that the History Channel hired to analyze the photograph for Amelia Earhart: The Lost Evidence. “I don’t have an explanation for why [the photograph] would show up two years early.”

In the documentary, Gibson said that based on the facial and body proportions of the two Caucasians, he said it was “very likely” that the photograph contained Earhart and Noonan.

In a phone interview with National Geographic, Gibson added that since the documentary filmed, he has acquired new facial-recognition software that signals a match between the photograph’s Caucasian man and Fred Noonan. His previous software had indicated that there were too few pixels in the photograph to successfully perform the analysis. (In a follow-up email, Gibson declined additional comment.)

In a statement emailed to National Geographic and separately posted to Twitter, the History Channel said that it has a team of investigators “exploring the latest developments about Amelia Earhart,” promising transparency in their findings.

“Ultimately historical accuracy is most important to us and our viewers,” the channel said.