At the recent September monthly meeting, held in the El Paso Club atop the Chase Bank Building in downtown El Paso, the local Daedalian Flight #24 welcomed its newest member.

The welcome was officially given by former USAF pilot and long time FASF member, Flight Captain Roger Nichols, after whose father, General Franklin A. Nichols, Flight 24 was named.  General Nichols flew in WWII, was an ace, and also one of the only pilots able to get aloft to fight the attacking marauders during the Japanese attack on Pearl Harbor, on December 7, 1941.

The Order of Daedalians Aviation fraternal society was organized by American military aviators who had fought in World War I.

The new member was none other than our own Colonel Alan Fisher, of Las Cruces, NM, who retired as an Air Force Command pilot and from his USAF career, while the commanding officer of the New Mexico State University (NMSU) AFROTC unit, the same unit commanded until 2016 by one of our current Trustees, Colonel Ira Cline. 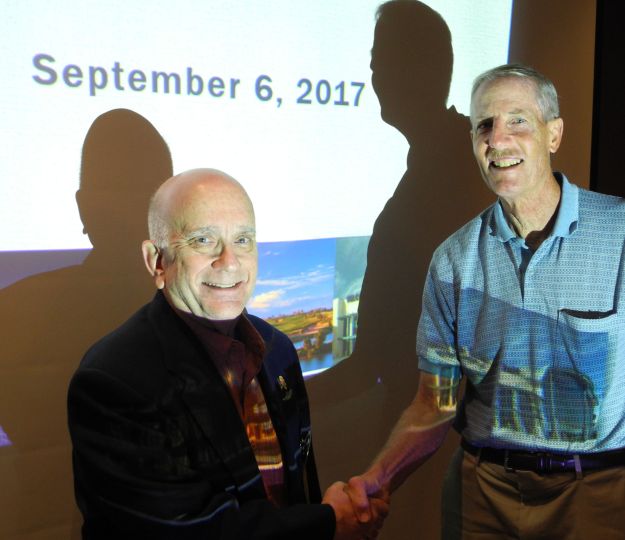 Alan, in addition to his current occupation as an independent Pecan Grower near Las Cruces, NM, is active with the Las Cruces Composite Civil Air Patrol Squadron (CAP) and was once its commander, as well.  He is one of the CAP unit’s most active mission pilots.  The meeting at which Colonel Fisher was inducted, featured a presentation by Monica Lombraña, A.A.E., the Director of the El Paso International Airport, who is pictured (below photo) in front of her presentation’s opening screen with Flight Captain Roger Nichols.