Have you ever noticed that the lower part of the Boeing 737NG engines appear flat? What is the reason for this – – – and a few more interesting details will be covered in today’s 7:56 min. video. 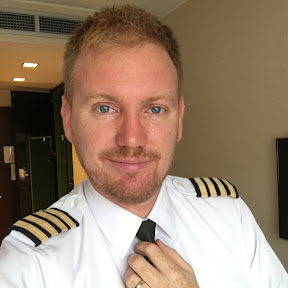 If you’re interested in aviaton from any point of view, you’ll enjoy visiting Petter’s informative YouTube channel, where you’ll find many answers to questions you’ve had about the industry, from how to become a pilot, to what kind a salary structures to expect, or to specific questions simply related to airplanes in general.

Now, here’s Petter’s story in his own words – in the international language of aviation: English.

“I, my mane is Petter, and I’m a 36 year old Boeing 737NG Training Captain and TRI/TRE (Tripple type rated / TRE: Type Rated Examiner)  Instructor from Sweden. I have a beautiful wife and two small sons that are constantly keeping me busy.  I have worked in the airline business for 16 years now and I have been based in different parts of Europe during that time including the UK, Sweden and Spain, where we now live.

Introduction to the Mentour Pilot channel (3:16)

I launched the Mentor Pilot Channel as a hobby project. I was being asked a lot of questions by young aviation enthusiasts about how I enjoyed my job, how I became a pilot and how things actually worked. I realized that there are very few ways to get questions answered out on the internet today in a simple and constructive way. If you go into forums like PPRUNE for example, honest discussions very quickly turns sour because of unhappy individuals trolling the discussion threads. I wanted my channel to be positive and constructive, the same way as we instruct new cadets in my airline.

I do realize that all views expressed on my channel are MY views and as such are only a reflection of what I think and might not be representative of others. I still think that it is better to get one honest and constructive view rather than 200 sour and negative ones. I do my best to tell both sides of the story but I do love my job.

The main goal is to help new pilots and people on their way into the industry to answer the questions they might have in a positive and constructive way.

I am also adamant on that my channel is not for political discussions and that I am only representing myself and no-one else.”

Here, below, is one more of Petter’s informative videos regarding why there are no main landing gear doors on the Boeing 737 series.