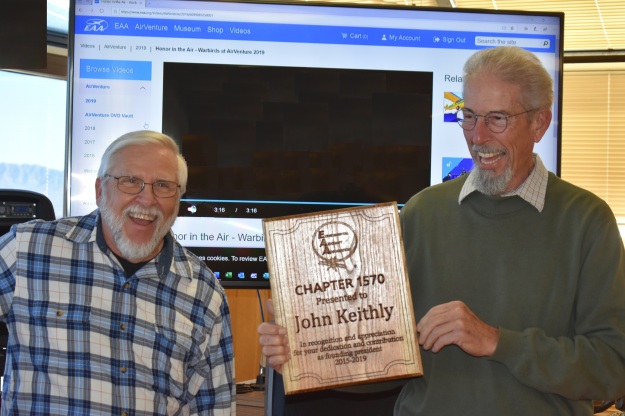 Any photos in this post may be seen in full-size and high resolution by simply clicking on them.

Above, all smiles, Rick King, has just awarded the chapter’s founding President, John Keithly, a wooden plaque attesting to John’s outstanding service as the 1570’s first President.  Today’s meeting was the first conducted by the chapter’s new President, Rick King.  The meeting at which Rick was elected, as well as the rest of the Chapter’s new officers, was reported here last October 13.  For a list of the new officers, click right here for that story.

Several operational changes were decided today:  The monthly meetings will now be held at the War Eagles Air Museum (WEAM) at the Dona Ana County International Jetport, the second Saturday of each month, as previously, but the time has been changed to 9:30 AM from 11:00.

The Board of Directors will meet in the museum executive lounge on the second floor at 9:00, a half hour before the regular membership meeting is convened.  Rick said that anyone who is interested is more than welcome to also come to the Board meetings.

Above, Bob Dockendorf, Executive Director of the WEAM, and founding member of the chapter and also an FASF member, reads to latest 1570 Financial Report to the members.

Visiting the Chapter gathering is, Rick Runnels, (above) a locally based Lear Jet Executive Pilot and friend of Rick King’s.

L to R above: Robert Lopez (behind John Keithly), one of the Chapter’s Flight Scholarship awardees, and Founding President, John Keithly, Juan Brito, Bruce King, and a new visitor to the Chapter, Adolfo Deras, who is also an EAA National member who lives in nearby El Paso, TX.

President, Rick King, demonstrates how the Chapter is now listed on the EAA National Home Website with details of its composition, and how the site will have a calendar showing all upcoming 1570 events of interest to the members.  He also described the many features of the EAA Home Website, which, among many intriguing features, includes webinars for members who are building experimental aircraft of their own.  He also pointed out how National Headquarters is awarding  funds to Chapters who want to develop their own Tool Banks for members to use when building their new airplanes.