This gave the Cadets a good chance to get to know an active duty Air Force pilot, the luncheon’s presenter, along with a number of Daedalian former USAF, Navy and Marine aviators, as well.

Many of the Daedalians, all of whom are long time FASF members, also entered the USAF from ROTC units.  The guest visit was arranged by FASF member, Air Force Academy graduate, and Daedalian Flight Commander, Colonel Alan Fisher.

Uniquely enough, well over twenty years earlier, Col. Fisher had been the Air Force Commander of these Cadet’s own AFROTC Detachment 505 at NMSU.

The guest speaker, Major Max Weaver, USAF, is from Arizona. He was raised in a family that valued service; his father served in the US Army and both his parents were police officers. In high school Maj Weaver joined the Civil Air Patrol (CAP) which gave him his first actual flight experience flying in CAP unit Cessna 172s. After High School, he majored in Foreign Area Studies at the Air Force Academy and spent a semester abroad in Nanjing, China where he learned their Mandarin dialect. He graduated with honors and was commissioned in 2011. 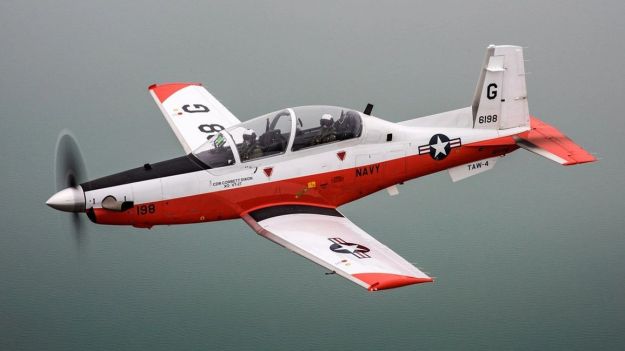 His first post flight training assignment was flying the C-17 Globemaster at McChord AFB, Washington.  He accrued over 1,000 hours in the C-17 and saw duty in Afghanistan, Iraq, Germany, Japan, and many other countries delivering mission critical cargo and supporting Presidential operations.  Globemaster III photo below.

In 2016 he began training on the MQ-9 “Reaper” at Holloman AFB, NM. His next assignment was to Ellsworth AFB, SD where he flew the Reaper Drone a total of 1,100 hours. These Close Air Support missions were flown in Iraq and Afghanistan to support ground forces fighting ISIS in the liberation of Raqqa and other territories.  Reaper photos below.

The Reaper has also been found useful in fighting forest fires.

As can only be experienced as a UAV or Drone pilot, Major Weaver flew all of these combat missions from a safe haven at an Air Force Base in the continental U.S. In 2020 he was transferred to Holloman AFB as an MQ-9 instructor pilot. He currently serves in that capacity and also as a Wing Flying Safety Officer while instructing students in the Air Force’s largest MQ-9 formal training program.

In his presentation to the Daedalians and guest AFROTC Cadets, he used the projector screen to show us some of the aircraft in which he accumulated his flight experience . . . including the Reaper.

Here, below, are some of the photos from Wednesday’s event.  To see them in full high resolution simply click on the photos: 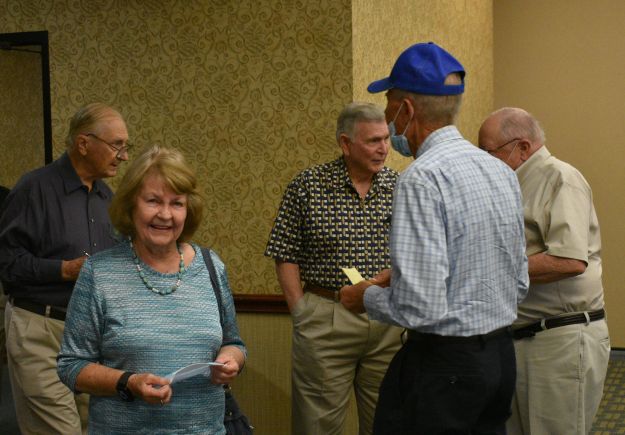 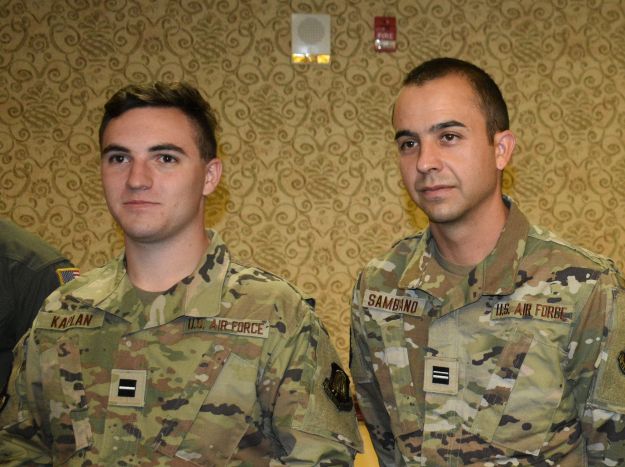 L to R: Cadets Preston Kaplan and Patrick Sambrano waiting be be introduced. 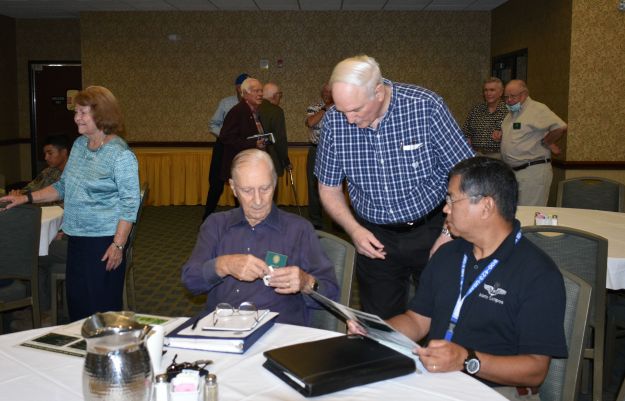 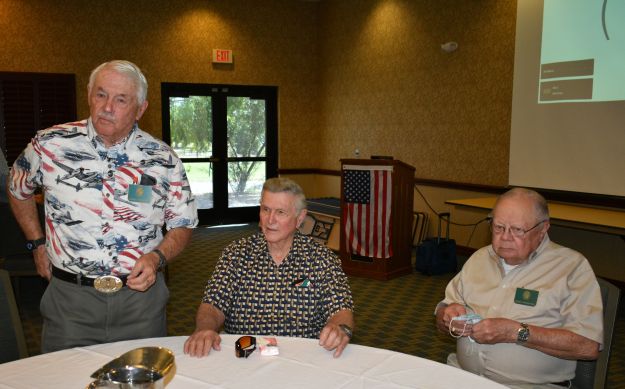 L to R: Pete Brandon pours water for Colonel Pitt, whose head of hair is at right. 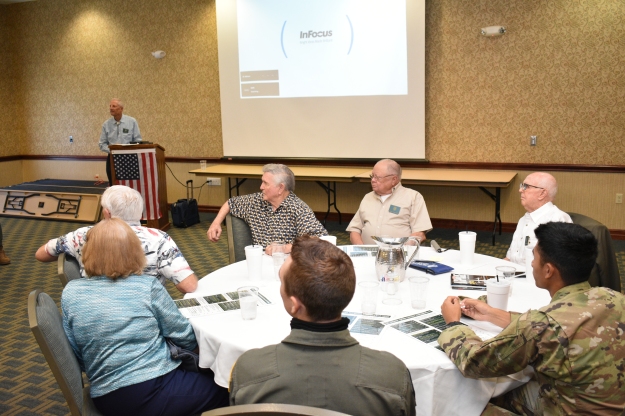 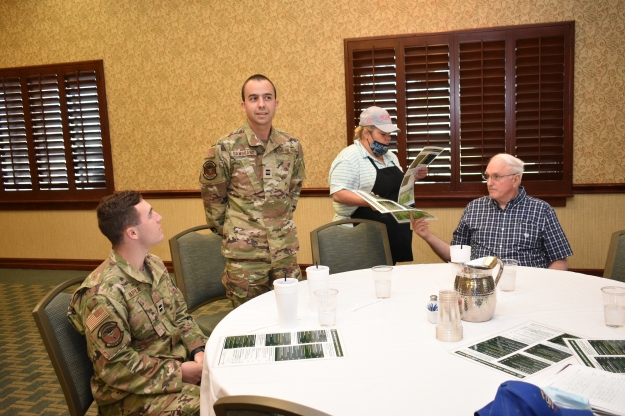 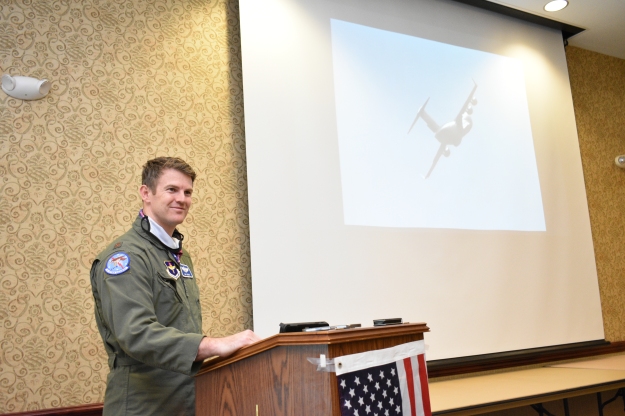 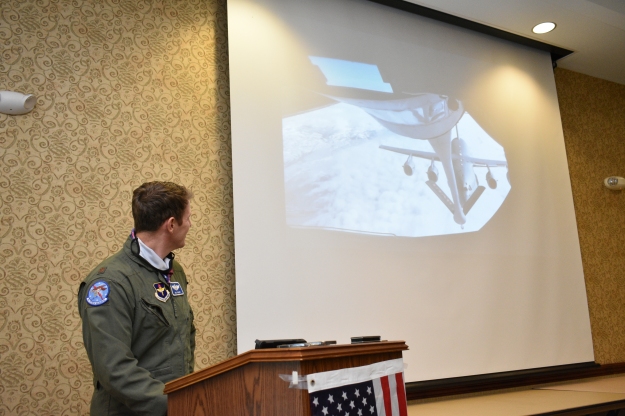 After his presentation, Colonel Fisher (R) presented Major Weaver (L) with a token of our appreciation for his talk 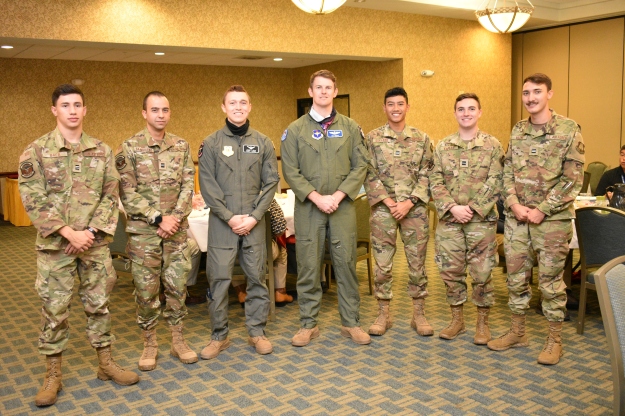