This past weekend, the 314th Fighter Squadron at Holloman AFB (HAFB), New Mexico, graduated 17 young men into the front line ranks of the Air Force’s top fighter squadrons stationed all over the globe.  HAFB is adjacent to the famous White Sands Missile Range.

Still framed shot above is by Lt. Aaron “Stroke” Gibson, F-16 Student Pilot Graduate. To see the Class’ Official 5:00 minute long Video, which was created by Lt. Gibson, simply click on this Photo and the 5 Minute Video will start up on YouTube.  Make sure your sound is turned on.  Watching this Video will give the viewer an insight into the daily sights and sounds typically experienced by today’s Air Force student pilots as they undergo their Basic Jet Fighter Training and qualification in the F-16 Fighting Falcon.

All 17 Graduating F-16 Fighter Pilots of Class 15-BBH* with Diplomas proudly in hand.  Photo taken by A1C Randahl Jenson of the HAFB Public Affairs Office.  His other photos in this story are credited as “AF Photo.”  The other photos are courtesy of the FASF Aerodrome staff.  As usual, to see the full resolution of any photo, simply click on it.  *[This is the meaning of the Class’ Acronym Title “15-BBH:” “15” represents the year this class commenced training: 2015, and the 1st “B” means this was the second class of that year; the second “B” stands for Basic Training; and the final “H” is for Holloman AFB].

This past weekend, the 314th Fighter Squadron at Holloman AFB graduated the above 17 young men into the front ranks of the Air Force’s top fighter squadrons stationed in almost every corner of the world.  They are now fully qualified to fly “wing” in their newly assigned squadron positions.  For the past year these pilots have responded with gusto and enthusiasm to the 314th Squadron’s Battle Cry: “STRIKE!”

This story is posted here for two reasons:

1:  Because four of our active FASF members had a role in this 15-BBH graduation ceremony and, because each of them is also an active member of the El Paso, Texas, FLIGHT 24 of the U.S. Military Aviator Fraternity, the Daedalians (an organization formed by World War I pilots some years after the end of that conflict’s hostilities).  All four are also former USAF pilots and one of them, Roger Nichols, is the son of the Flight’s honored namesake, Major General Frank A. Nichols, a highly decorated Air Force pilot and ACE who flew combat throughout WWII and later served in high ranking command positions in both Korea and Vietnam.

2:  Because it has become a tradition that the Daedalian Flight 24, with its many FASF members, award an outstanding leadership achievement trophy to one of the top Student Pilots of each graduating class of the 314th Fighter Squadron at Holloman Air Force Base.

Furthermore, this graduation event provides an insight, by way of these posted photos and especially the short video, into our current USAF operations, particularly in respect to one of its vital defense training programs.  It is good to remember that the 1st Aero Squadron’s ubiquitous Jenny biplane was tested and proven as a stable enough aeroplane that it could be – and was – put into mass production in order to be used to train pilots for WWI. The First Aero’s Jenny  would be used to train more than 20,000 young men to become Army Air Service pilots, destined to fight – and too often perish – in the skies over Europe in WWI.

Roger Nichols describes the Order of Daedalians‘ history and also that of his own Air Force Ace Fighter Pilot father, Major General Frank A. Nichols, to the audience.

Another special Award Recipient among the graduates was Lt. Logan “Pacman” Mitchell. This trophy is called the “Warrior” Award and also entitled the “River Rats” achievement, a name arising from the Vietnam era conflict and given to the the student voted the one the other pilots would most want to have fly (protectively) on their wing.  Presenting the trophy is former USAF Lt. Colonel and F-4 fighter pilot, Miles “Cowboy” Crowell. AF Photo. 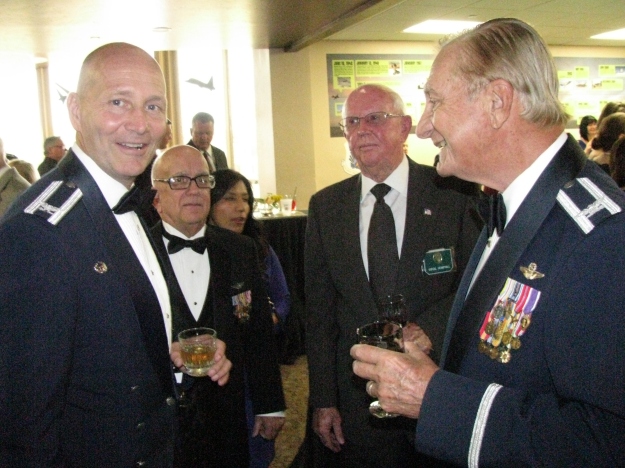 L to R above: Daedalians Colonel Bob Pitt and Roger Nichols engaged in an animated discussion. 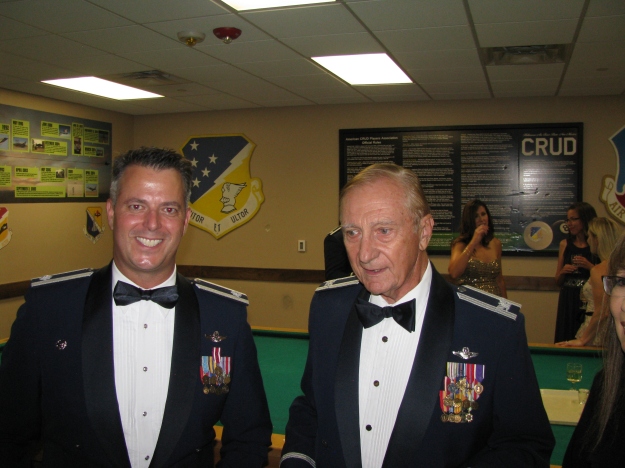 Above L to R: Roger Nichols and Colonel Bob Pitt.

Above L to R: Dr. David Ross, Mrs. Linda Ross, Capt. Graeme “Pug” Ross, and his brother, Brendan.  Captain Ross had earlier been awarded the Class Daedalian “Leadership Award.”  Captain Ross will soon leave for his next duty assignment at Osan Air Base in South Korea.