Sooo – you thought you knew most everything there is to know about the famous and much distinguished Army Air Corps’ P-51 Mustang, its top WWII fighter aircraft?  Well, read on and be surprised at what you might learn about this beautifully classic, yet lethal weapon.

Early Mustang MKI, with US Markings, being test flown near Inglewood CA NAA Plant in 1942, before delivery to the RAF

After the war ended and during the Korean conflict, it became known the F-51, in its final version.  Of course, the “P” for the early version stood for Pursuit, and the later “F” stood simply for Fighter. Did you know that is was the fastest propeller driven fighter during the war – that its top speed approached 500 mph? 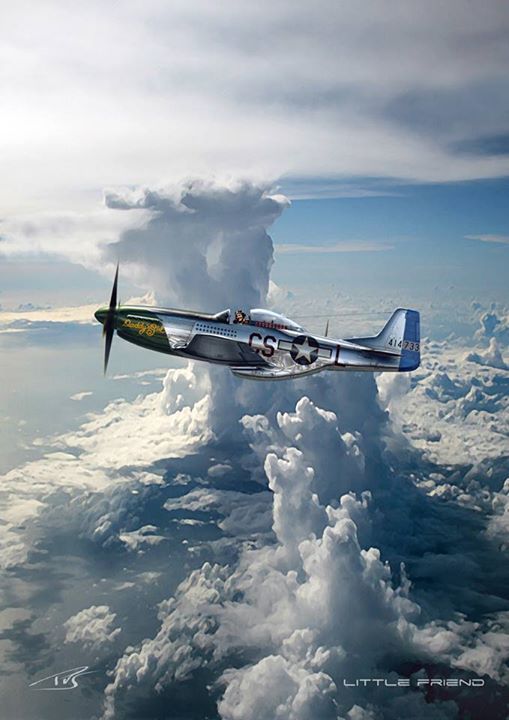 Almost Spiritual Depiction of Mustang Above the Pacific and Clouds, the Pilot with His Canopy Open to Savor the Unique View that so Inspires the Airman to Continue Soaring on High 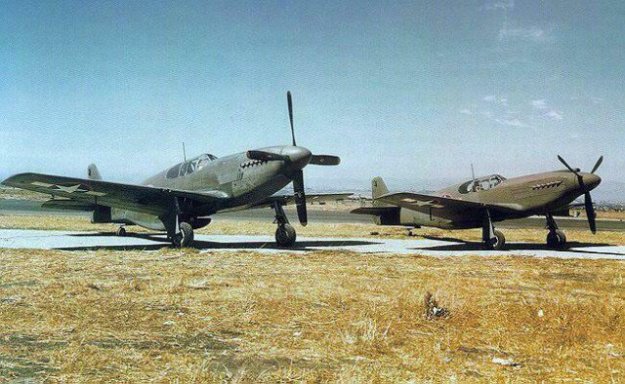 P-51A Mustang fighters, with different propellers, Parked Side by Side on Ramp at NAA Plant in Inglewood, CA in 1943

Well, there’s even more to this fabled and beautifully designed propeller driven war machine than many of us even suspected.  While most of us know that it played a vital role in helping the  Allies win WWII in Europe, it wasn’t even designed for the American Air Forces!

In truth, it was designed by a naturalized German American designer, who was employed by North American Aviation (NAA) in Los Angeles, CA – way back in the late 1930’s – and it was designed for the British – – – not the United States Army Air Corps, a branch of the service which mistakenly believed its bomber fleet was so advanced that it needed no fighter protection – none!

Well, this story is about that terrible miscalculation on the part of the top Army Aviation leadership, a mistake so serious that it literally cost us thousands of lives – of bomber crews who didn’t stand a chance against the Nazi’s high performance ME-109s and Focke Wulf (FW) 190 fighters, which picked off the unprotected U.S. bombers like sitting ducks.

The following article sheds a new light of the fabled and much loved North American “Mustang,” as it was affectionately known by its pilots and crews – both its British and later American crews.  The pages of this FASF website have devoted much space, both pictorial and video, to this great WWII fighting machine and, of course most of you visitors have your own personal experiences with the Mustang – having possibly even flown it, or at least seen it perform its magic in the skies over the crowds of American Airshows or maybe even at the popular Reno Air Races, in which its presence is always a certainty.

You’ll discover in the following story how our own highly touted Allison liquid-cooled V-12 engine, which was originally the designed power plant for the Mustang, was just not adequate for the air superiority fighter’s challenging role.  You’ll learn how the English Rolls Royce Merlin V-12 had to be the replacement power plant for the troubled American Allison.  You’ll see how that big change gave the Mustang utterly amazing new performance excellence, and how that same Merlin engine, which was already powering the great British Spitfires, too, actually made the Mustang much faster than the Spitfire.

Did you know that our highly decorated and famous Air Corps General, Hap Arnold, actually believed that drop tanks for the P-51 were unneeded?

This story is a remarkably insightful – an outstanding job resulting from painstaking and brilliant historical research.  We think you’ll agree that this piece reports on the real – and more complete history of the Mustang.  In fact, this piece ends up rewriting – significantly correcting – the official (propagandized) version of the colorful history of not just this remarkable airplane, but of how the war, particularly the costly bombing campaigns were actually fought over the European Continent.  By reading this revisionist Mustang history, a piece from carefully reconstructed U.S. Air Service records, you’ll learn many new aspects of the Mustang’s true roll in the history of our victory over the Axis powers.  We’d venture that you will come away with a new and deeper understanding – and likely even more respect for this fighting machine’s actual role in our European victory.

Without further ado, here’s the insightful and possibly even shocking, yet true story, about this highly acclaimed WWII Fighter.  Its widely respected authors are James Perry Stevenson and Pierre Sprey. Click on the red underscored text above to see the full story.

James Perry Stevenson is the former editor of the Topgun Journal and the author of The $5 Billion Misunderstanding and The Pentagon Paradox.

Pierre M. Sprey is a co-designer of the F-16 fighter jet, was technical director of the U.S. Air Force’s A-10 concept design team, served as weapons analyst for the Office of the Secretary of Defense for 15 years and has been an active member of the military reform underground for the last 35 years.

By the way, do any of you know how many P and F-51s are still flying?  Your webmaster suspects there may be more of these vintage fighters airworthy and operational today than any other single model of a WWII airplane.  Please make a comment on site if you know the answer!

2 thoughts on “Sooo – You Thought You Knew All About the P-51 Mustang?”