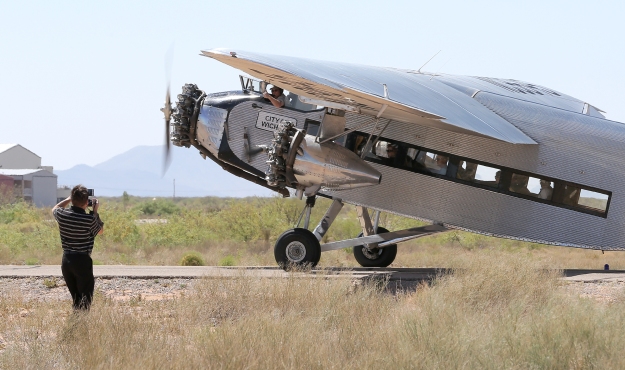 Tracy Miller takes photos of the Ford Tri-Motor as it taxis this past week at the Santa Teresa International Jetport. Photo Courtesy of Mark Lambie and the El Paso Times Newspaper. Ford Trimotor Captain Steve Lambrick waves from cockpit.

Some interesting facts about the Ford Trimotors:

This particular ship is powered by three P&W R-985 Wasp Junior engines of approx. 400HP each.  But the planes could and were equipped with many different engines of more or less horsepower.

Different models also had different cockpit and windshield designs – some were streamlined (slanted back) and some actually slanted forward (as does this model in which we rode this weekend), while others were simply vertical windshield panes. Some had engine cowls on their outboard or wing mounted engines, some even on the nose engine, and some even had fenders over their wheels, while some others had streamlined fairings over vertical wheel strut supports.

Some Tri-motors were seaplanes and others were fitted with skis for snow bound operations.

The ship was first designed by William Bushnell Stout to be single engined. But Stout sold out manufacturing rights to his aircraft to Henry and Edsel Ford.  His designs were originally inspired by the all-metal German aircraft designer, Hugo Junkers, and closely resembled the German’s Fokker F-VII Trimotor.

Junkers sued Ford when he tried to sell the planes in Europe – – – and he won, since the Ford too closely resembled the Junkers G-24. While the corrugated aluminum sheeting was very strong compared to the flat sheets coming into use, it was aerodynamically productive of far too much drag.   Ford sued Junkers a second time, and the court in Prague again declared that the Ford Trimotor had impinged on the Junkers’ patents.

Ford’s later AT-5 version had drop-down cargo containers in the bottom part of inner wing sections.  More than a dozen Ford Trimotors were purchased by the Army Air Corps in the early thirties with varied engine models from 200HP to 300HP.  Ford’s pilot, Henry J. Brooks died in a test flight, causing Ford to lose his enthusiasm for aviation investments.

The Douglas DC-2 and 3 quickly outperformed and outclassed the Trimotors.  But Ford lent great credibility to the fledgling American aviation industry, and, while not profiting from his Trimotor production, the brilliant entrepreneur did bring about many important infrastructure innovations such as: paved runways, passenger terminals, hangars, airmail and radio navigation.  By the late 1920’s the Ford Aircraft Division was reportedly the “largest manufacturer of commercial airplanes in the world.”

Before abandoning his aviation enterprise, Ford designed “every man’s” airplane, a single seat commuter plane called the Ford Flivver in 1927.

Meantime, a total of 199 Ford Trimotors were built between 1926 and 1933, including 79 of the 4-AT variant, and 116 of the 5-AT variant, plus some of an experimental variety that were never produced.  One of Latin America’s earliest airlines, Cubana de Aviación, was the first to use the Ford Trimotor in Latin America, starting in 1930, for its domestic services.

Below are the two videos (Part I and II) shot and edited by Ric Lambart on the last day’s ops. The first video is 7:07 minutes long, less the end credits and the second (II) is 14 minutes long.

Below is a video made by long time FASF Member and one of our top Historical Consultants, John Read.  He and his wife, Elli, joined in the fun and excitement over the weekend as you can see. (4:12)

The original Stout prototype; one built. (Destroyed in suspicious fire)

The original production version, similar to the Ford 4-AT prototype; 14 built.

Similar to the Ford 4-AT-B, equipped with a 400-hp (300-kW) Pratt & Whitney Wasp radial piston engine, fitted in the nose of the aircraft; one built.

Three aircraft similar to the Ford 4-AT-B, each with different engines and minor modifications.

One aircraft similar to the Ford 4-AT-E. 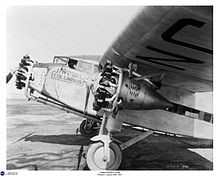 Proposed version, the engines were relocated to the wing leading edges.

Redesignation of a single Ford 6-AT-A, equipped with a 420-hp Pratt & Whitney Wasp radial piston engine, fitted in the nose of the aircraft.

One Ford 5-AT-D was converted into a three-engined bomber aircraft.

One 4-AT-B acquired by the military for evaluation[19]

Military transport version for U.S. Marine Corps, based on the Ford 4-AT-E, but with three Wright J6-9 engines; two built, redesignated RR-2 in 1931[21]

Redesignation of the XJR-1 prototype[22]