The inimitable Douglas DC-3, the airliner that changed the way the world traveled back in the mid to late 1930s, and that doggedly remains with us to this day (see 2nd video below), delivering cargo and people, often into places other more modern aircraft cannot safely fly.

The following video is from a promotional film from one of that famous airliner’s biggest customer-users, AMERICAN AIRLINES.

Your webmaster’s first ride on a DC-3 was beyond memorable.  It was back in 1948, when this airliner was still going strong.

I was visiting from the suburbs of Chicago, where I had lived most my life, and vacationing at my Grandmother’s in Hollywood, CA,, when I was suddenly wired by Western Union (remember those telegrams?) to report for my College Navy ROTC Physical Exam in NYC – – – in only a week.

I’d driven my car from Chicago for my first visit to California and it had taken me a grueling two week’s time to make the journey.  There was simply no way I could pack things up and report in NYC in only a week.

So, I immediately sold my car to a local dealer (I’d always sold autos on my own, after refurbishing them, for a handy profit) in a hurry, booked a ticket to Chicago with American Airlines, and flew back home to Chicago – – – on my first long airline flight, and in none other than that inimitable one-and-only Douglas DC-3!

When driving around CA and the LA area, we’d always honked whenever we saw another Illinois license plate drive by.  Interstate Freeways were still but a dream.  When I arrived in Chicago, I quickly reached over and honked my Mom’s horn at other passing cars – – – but she pointed out I was back home, where almost all the cars were from Illinois.

The short time it had taken me to fly home threw my sense of time and space completely off. But, I was now initiated –  by the DC-3 – into the realm of modern era long-distance air transportation!

Only 7 years later, now a college graduate and a USAF Pilot, I was given the privilege of actually being checked out to fly that same much admired DC-3, which we Air Force pilots affectionately called the “Gooney Bird” or C-47.  What a delightful plane it was to fly.  Easy to handle, stable as one would ever want, and, for a tail-wheeled airplane, still not hard to land.

However, after flying single-engined jets, where one sits only feet off the ground, this cockpit had me sitting almost two stories up. That was quite a change.

Without further ado, here’s the DC-3 story video, which is 25:12 in length.  Remember to keep your volume up – and to immediately switch to full-screen, so you can appreciate this film.

[As an aside: We’d like to bring your attention to the many other fascinating and meaningful peeks back into history provided by the good folks at Periscope Films.  Their catalog is loaded with great film/video materials on a broad variety of topics.  Check them out!]

And, here below, is another video, showing how we are now refurbishing this great workhorse flying machine, and making it good for many more years to come.  From THE AVIATORS Season 3 – “GIVING THE VENERABLE DC-3 NEW LIFE” – This video is just shy of 13:00 minutes long: 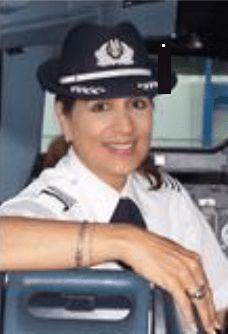 May 31, 2018 – Hot off the newswire from the EAA:  The EAA Founder’s Innovation Prize has added another highly regarded aviation expert to the lineup for the Tuesday night competition during EAA AirVenture Oshkosh 2018. Retired Lt. Col. Olga Custodio, the first female Hispanic fighter pilot in the United States will be the emcee, presenting the five finalists in the live showdown. The Founder’s Innovation Prize, presented by Airbus, is in its third year and challenges EAA members to share their best solutions for lowering the rate of in-flight loss-of-control accidents, the leading cause of fatal accidents in the general aviation community.

Custodio retired from the U.S. Air Force Reserve with 24 years of service. Among her countless achievements, she was the first Hispanic female to graduate from U.S. Air Force undergraduate pilot training, became the first female T-38 UPT (Undergraduate Pilot Training) flight instructor at Laughlin Air Force Base, and then became the first female T-38 pilot instructor training flight instructor at Randolph AFB. She was awarded the Air Force Air Education and Training Command’s Aviation Safety Award for superior airmanship during a bird strike and engine failure emergency and for executing a safe heavyweight landing in weather minimums.

After resigning her U.S. Air Force commission, Custodio entered the Reserve as an officer training school instructor and began her 20-year career flying for American Airlines. She has logged more than 11,000 hours of flight time.

See Custodio and the five Founder’s Innovation Prize finalists at An Evening with Innovators on Tuesday night July 24 at Theater in the Woods.

Those who still wish to submit their idea for the competition must do so before 11:59 pm CT on Friday, June 1, for a chance to win one of three cash prizes.  Visit www.EAA.org/prize to learn more.

Below is a 7 minute long video is of an interview by FOX NEWS TV of Retired USAF and American Airlines Pilot, Olga Custodio.

Many of you most likely heard the news two days ago, on Tuesday, when it was reported by all the major domestic TV networks, that the Albuquerque Air Traffic Control Center had just dealt with a report from two commercial aircraft and their professional pilots, both traveling towards the West over New Mexico and Arizona, that they had seen an object (UFO?) above them moving towards the East.

The FAA chose, in an unusual move, to release the actual recorded conversations between the Air Traffic Controller and the pilots involved in the incident.  None of the pilots could accurately identify what the strange vehicle was, and the made some humorous remarks that it might have been a UFO, or a “weather balloon” – – – which was likely a sarcastic reference to the famous Roswell incident of 71 years ago, in which the USAF quickly altered their first public information release describing a UFO wreck to one of a wrecked “weather balloon.”

It would appear that the old government policy of secrecy regarding such incidents has finally been abandoned.

Here, below, is the actual Air Traffic Controller’s communications with the pilots flying over Arizona and New Mexico.  The official recording soundtrack has been spliced with a separate stock royalty-free view from an airliner for special effect.  Therefor the video portion is not of either of the reporting aircraft, but the the audio is that of the actual conversation.  Note that the Air Traffic Controller did not “see” the UFO on his radar screens.

It is interesting to note that the UFOs are often picked up by radar, but others in the vicinity cannot see them with their naked eyes, and vice versa is also regularly the case.

There had been a great deal of activity in this field of trying to identify these strange  vehicles ever since the mysterious news about our first official sighting of an unidentified flying object that ostensibly crashed near Roswell, NM in 1947, shortly after the end of WWII.  It was either on or close to July 4, 1947 when this famous incident occurred.  Here is the official New Mexico government description of that event.

For the most part, ever since the Roswell Incident, there has been a growing group of people interested in the entire subject, and these UFO enthusiasts, if one can call them that, can now be found in every corner of the globe. Some of these self-described UFO experts have even pointed out that there are pieces of art dating back thousands of years in which UFO and modern type air vehicles were depicted – and those ancient artifacts look astoundingly similar to both modern UFO (flying saucer varieties) shapes as well as those of modern day helicopters.

However, during the years following Roswell, the official policy of the U.S. Government and its agencies has been to keep the matter quiet and to issue no news releases, or any kind of overt official commentary, for that matter.  This old secretive posture now appears to a changing policy.  It is now well established that the Air Force established a special secret project entitled “Project Blue Book” in the year 1947, but the secret USAF enterprise was not discontinued until 1969.  For those 27 intervening years, a massive amount of data was accumulated, material resulting from both civilian and military reports of  UFO phenomena.  Sometimes such UFO incidents are simultaneously seen be so many civilians, both here and abroad, that the press could not ignore the witnesses, and, accordingly some fairly recent mass sightings of UFO’s have made international headlines. Six years ago, in 2012, the National Geographic Society actually published its list of “Ten Mass Sightings of UFOs.”  But, while this article drew attention to some major incidents with large masses of witnesses, they neglected to mention the huge sighting in Mexico City by hundreds of thousands of Mexicans, who witnessed a large group of fighter type UFO vehicles above and South of Mexico City in 1997,

Just recently, the news media also released recordings of several Navy pilots flying off an aircraft carrier near San Diego, similar to this Tuesday’s incident with the American Airlines pilots, in which the Navy F-18 pilots were alerted by their shipboard (USS Nimitz) radar operator that there was a mysterious “target” near them – – – and the pilots were requested to investigate.  As the pilots observed (in the recorded radio transmissions), the “object” could not be identified.  But it did not behave as do modern day aircraft, but rather did things normal earth designed airplanes cannot accomplish in terms of speed and sudden changes of direction and altitude.  Here, below, is the formerly classified incident, as seen by the fighter’s own gunnery camera.  And the audio is that of the pilots’ communication with the Nimitz.

Just recently, one of the former Navy fighter pilots, David Fravor,  who took part in the short UFO chase back in 2004, told his story on national TV.

So, the question, “are we alone,” may now be taking on another dimension.