No need to add much text to this one-of-a-kind video clip of the one-and-only Navy’s Blue Angels Exhibition Team at work.

From the slot position to the lead aircraft – and then from number one’s belly, you get views once unheard of.  Amazing videography, not to mention aerobatic precision.

These barrel rolls, loops, inverted climbing turns and “bursting bomb” maneuvers are breathtaking from the deck, but from onboard these sleek McDonnell Douglas F/A-18 Hornets your view is really spectacular.  This video was taken just last month over Puget Sound as the Blues performed over Seattle Washington’s annual Boeing SeaFair Air Show 2019.

We’ve put a composite photo down below showing the different aircraft used by the “Blues” since they first began to thrill the crowds at the end of WWII.  The main video is only 6:19 long.

Don’t hesitate to enjoy this high-resolution video in full-screen mode.

Click the above and below group shots to see them in full resolution.

The 2019 Team Members pose for the official group portrait. Click on the photo to see their names at their web site. 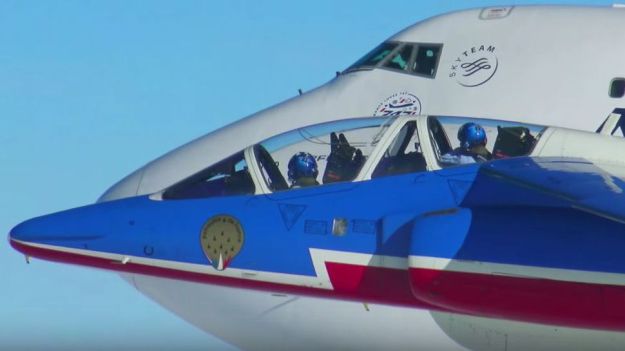 Video: Air France: Credits : Airborne Films for Air France and the French Air Force and the Patrouille de France.  Keep you sound turned up to hear the video’s scoring.  The Video length is 3:30.

This impressive video was shot on January 27th, two years ago, when a dozen jewels of French aviation met over the Camargue region of France. Eleven Alphajets from the Patrouille de France (the Patrouille is the French equivalent to our Thunderbirds and Blue Angels Military Exhibition Teams – but is the world’s oldest such team) and the last Air France 747 flew in formation as a salute to the Boeing Icon’s last days with the airline.

On 14 January 2016, Air France offered customers a tribute flight over the country’s landmarks. The flight number as AF747. More than 45 years after the first flight from Paris to New York on 3 June 1970 the Company saluted the Jumbo Jet’s last flight in style with a business class lunch along with champagne for all.

Since the early seventies, the Boeing 747 has been a showcase of modern innovations and has revolutionized air transport. Air travel became more widespread and we entered an era of mass tourism. For cargo, the Boeing 747 had pressurized holds, which were ventilated and protected against fire. Four times larger than the previous generation of Boeing, the 707, they could carry 122 tons of cargo! On both of my trips from Montreal to the Paris Airshow I flew on the Air France Combi 747.

Air France was one of the first airlines to operate this aircraft, making it the flagship of its long-haul fleet: New York, Montreal, the French West Indies, Reunion, Asia … most of the Company’s destinations have been served by the Jumbo.

Air France says, “We started innovating from the early seventies. The role of chief purser was created to coordinate the service and attention paid to customers in this aircraft which could carry up to 500 passengers. Inflight cuisine was of great importance, with menus designed by great French chefs: Paul Bocuse, Gaston Lenôtre and Pierre Troisgros. Finally, the cabin interior was designed by Pierre Gautier-Delaye, who paid particular attention to the comfort of the seat cushions and seatbacks.”

And the Blue Angels “Swap Paint.”

Thanks to “Fighter Sweep” we have this following news story about the two U.S. military aviation demonstration teams’ exhibition over NAS Pensacola, Florida, home of the Navy’s principal Flight Training Station. See the below 1:11 long video.  You may ask, “what’s it mean to swap paint?”  The video explains.

And why were the Thunderbirds joining up with the Blue Angels?  It was the 71st Birthday for the Blue Angels, and the USAF Team crashed their party.  They hadn’t done this since 2002. But it was a friendly exchange of not just greetings and airborne teamwork, but also of ideas and mutually similar experiences in the crowd thrilling exhibition business.  For the “younger” Thunderbirds, it was their 70th birthday.  This video is 1:53 long.

Earlier, here below, is a USAF KC-135 Tanker refueling the Navy’s Blue Angels exhibition team in mid-flight.  This clip is 1:01 long,  and shows some beautiful footage of the refueling action as it takes place.  One of our more active FASF members, Col. Alan Fisher, accumulated many hours flying this same tanker during his USAF career.

Thanks again to our Aviation Scout, Virg Hemphill, for finding this outstanding video segment of the US Navy Flight Demonstration Team busily practicing their maneuvers.  This is excellent video footage taken both inside their jets as well as of them from the outside.  This video is only 3:43 in length, and little descriptive text is required, since the film speaks for itself.  But this does show why it’s easy to become enthusiastic about flying these high performance Fighters.

Don’t hesitate to click your browser into Full-Screen Mode in order to get the best vantage of the cavorting jet fighters.  And remember to turn on your sound also.  You might wonder, if you’re not a pilot, why the Naval Aviator seen here is grimacing so often:  It’s because he is tightening his stomach muscles in order to prevent himself from “blacking out” from the high “G” forces (“g” is for gravity).  The aircraft you see here are the Blue Angel’s new McDonnell-Douglas manufactured F-18 Hornets.